Popularised by the internet foodie community as one of the best sushi restaurants in Japan that “serves a lot of food”, Sushisho Masa – a 7-seater edomae style sushiya located in the heart of Tokyo’s upscale Nishi Azabu district – gained the attention of global audiences when prominent YouTube duo Simon and Martina Stawski, shared a ‘vlog’ of themselves each eating their way through more than 40 servings of sushi at the restaurant in 2013.

Provocatively titled as the “Best Sushi in Japan”, the video documented a night of buffet pampering by Sushisho Masa’s chef Masakatsu Oka, punctuated by scores of ‘Mmms‘ and ‘Ahhs‘ as the Stawskis stuffed their bellies with delicious-looking otsumami and nigiri. The video quickly attracted over 4 million views, and questions were raised if Masa was truly the “best in Tokyo”, if not in the whole of Japan. Some went as far as to claim that Masa’s excellent value, variety and friendliness (at ¥20,000 per diner) could easily surpass a pilgrimage to the sushi temple of Sukiyabashi Jiro (Michelin three-starred, at ¥30,000 for nigiri-only omakase), despite not having dined at the latter before. “Why bother with Michelin-starred sushi restaurants when you have Sushisho Masa?“, quipped Masa’s fervent supporters, who echoed their “mind blowing” dining experiences over social media and the internet.

We wanted to partake in all that glorious belly-stuffing feast, and were curious to find out if Sushisho Masa lived up to its hype. Alas, after securing our reservation through our hotel concierge 2 months in advance, the opportunity to try out the Masa experience finally arrived in early 2017.

As much has already been written about the extensive progression of courses at the sushiya – you can find well detailed blog posts here and here – we wanted to highlight our key observations as foreign diners, as well as 5 things you should take note before visiting Sushisho Masa. Without further ado, our thoughts and verdict:

1. Not a “mind blowing” experience, and more is not always better.

Here at Sushisho Masa, Masakatsu-san – a former apprentice of the well-respected Sushi Sho – bases his sushi philosophy on the ‘Sho style’ of serving diners an alternating series of otsumami and nigiri, albeit with a copious succession of courses (ranging from 40 to 50 pieces). Unfortunately, a larger quantity of food did not equate to better quality and taste; there were many mediocre pieces and a few disappointing ones we could do without. The otsumami of lightly grilled shirako (cod milt) was an example: while generous in quantity, the dish was not well-seasoned and left an alkaline aftertaste, rather the usual creamy sweetness. We should point out that we ate A LOT of shirako during the trip as it was in season, and Masa’s rendition paled in comparison to the versions we had at other restaurants. Shirako is typically an acquired taste for many first time diners, and you will be better off tasting the winter delicacy at other sushiyas or as part of creative dishes at modern/innovative restaurants like Florilege or L’effervescence.

2. There were several really good, but not excellent dishes.

Pieces we enjoyed at Sushisho Masa include the maguro (tuna), tako (octopus) and tamago (egg). The triple-layered “mille feuille” otoro nigiri was a highlight of the evening, although we had better neta and uni (sea urchin) at other sushiyas during the trip. Sushi Iwa uses outstanding maguro in its omakase courses, and is a great “introductory sushiya” for foreign and first time diners, or for sushi seekers who love a good value. Lunch at Iwa starts from ¥‎5,000. 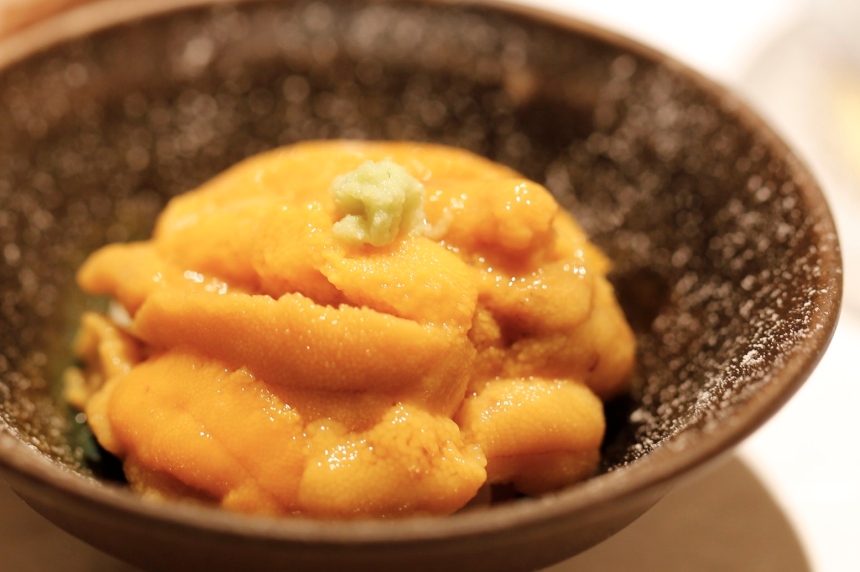 From start to finish, Masakatsu-san and his assistants introduced each otsumami and nigiri course to gaijins or foreign diners in English, and were ready to answer questions on seafood origins and preparation methods from curious diners – just do not expect detailed answers (as vocabulary is limited) or industry secrets (i.e. recipes or supplier sources). Staff at Sushisho Masa also did not hesitate to whip out a handy pictorial booklet to show the kinds of fish and seafood being served. For those new to eating edomae style sushi, this is a great way to familiarise yourself with neta ingredients as you enjoy your meal.

4. Chef has plenty of showmanship, but preferred to interact with Japanese-speaking diners.

Masakatsu-san is reputed for his friendliness and animated nature – this is certainly true when we were there! His movements and way of speech (at least when conversing in English) were slightly exaggerated, and he always had a smile ready for every guest who arrived. It was however, interesting to note that he spent most of the night engaging in deep conversation with a Japanese couple who sat at the end of the table, despite having 5 out of 7 seats occupied by foreigners. This is not an unusual outcome given the language barrier, but do not expect being entertained by the chef throughout dinner.

5. Eating at the restaurant for “as long as you like” is a myth.

Reviews often rave about how Masakatsu-san generously feeds his diners for hours until they are full and can no longer eat another serving of sushi, but most people – including us and other diners at the dinner service – cannot tolerate beyond 40-45 courses, especially with a progression that alternates between cooked otsumami and nigiri. Masakatsu-san also signalled to us that our dinner had come to an ‘end’ with the arrival of the final tamago course. Interestingly, foreign diners were told to hurry up their last courses so that the restaurant could host its next seating of guests, while Japanese diners were allowed to continue eating – not that we are complaining and neither were we begging to stay for more.

Gourmand journeys through Japan and the rest of the world. Keep us bookmarked and stay hungry.

This site uses Akismet to reduce spam. Learn how your comment data is processed.