When you have flown 7,000 miles away from home, travelled (and dragged along 90 pounds of luggage) across the Hendaye border by train from Paris to spend a weekend at the sleepy seaside town of Donostia-San Sebastian in Spain’s Basque Country, you would want to make it your most perfect 48 hours – of no holds barred gluttony and making merry, that is. San Sebastian is renowned for its stellar assembly of pricey three-star Michelin and World’s Best restaurants (enter Arzak, Azurmendi and Asador Etxebarri), that have placed the Basque region on the culinary world map for having the most Michelin stars per capita. But the city’s humble hole-in-the-wall pintxo bars deserve equal attention; casual, loud, affordable and usually in the form of standing bars, the cooking is often simple and outstanding in umami, with its best chefs stubborn on sticking with high quality, locally-sourced ingredients. In recent years, a new generation of modern chefs (Bar Zeruko, Atari Gastroteka) introduced ‘experimental’ cooking to pintxos that are playful and inventive, but not more or less exciting than their classic counterparts (i.e. they are very different in approach).

Having done our research months prior to the trip, we dedicated an entire day to embark on a pintxo crawl of some of best bars along the Old Town of San Sebastian, indulging in plenty of cold, skewered pintxos lined up at the bar counter and cooked to order dishes paired with local wines, ciders and beers. And when in the Basque region, drink all the txakoli (a local semi-sparkling, dry white wine) you possibly can, and watch in awe as bartenders pour the drink from height to create bubbly fizz! 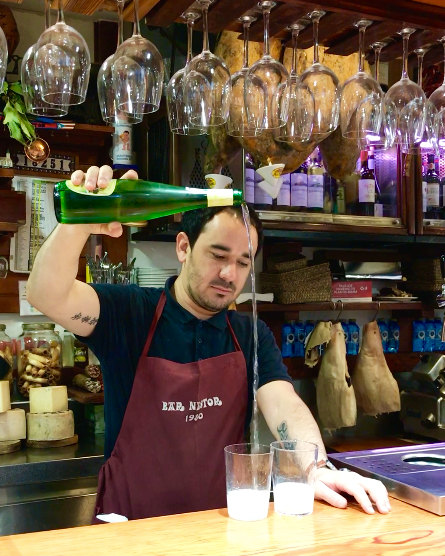 Here are a few of our favourite pintxo bars to visit:

When in San Sebastian, one cannot miss out on its famous tarte de queso, a Basque-style baked cheesecake that has dominated the feeds of Instagram foodies and spawned a legion of copycat recipes in the past few years. The go-to spot for tarte de queso is La Vina, said to serve the best cheesecake in the world. A single portion order came with two generously sliced cheesecakes, its crust beautifully burnt and caramelised from oven heat, with a delicious filling that was smooth and surprisingly light. Take your bite of cheesecake to the next level of  umami bomb by pouring sherry over it – a tip that we discovered from (not surprisingly) the best Instagram foodies. 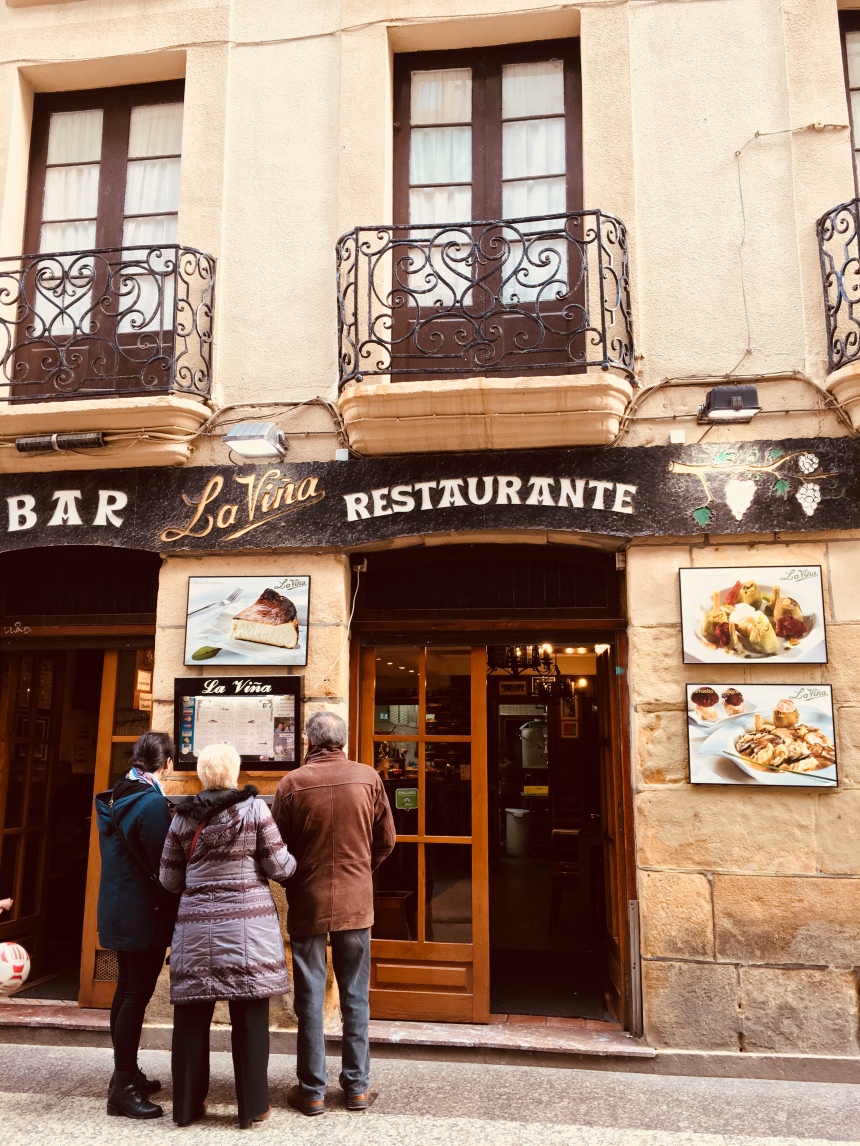 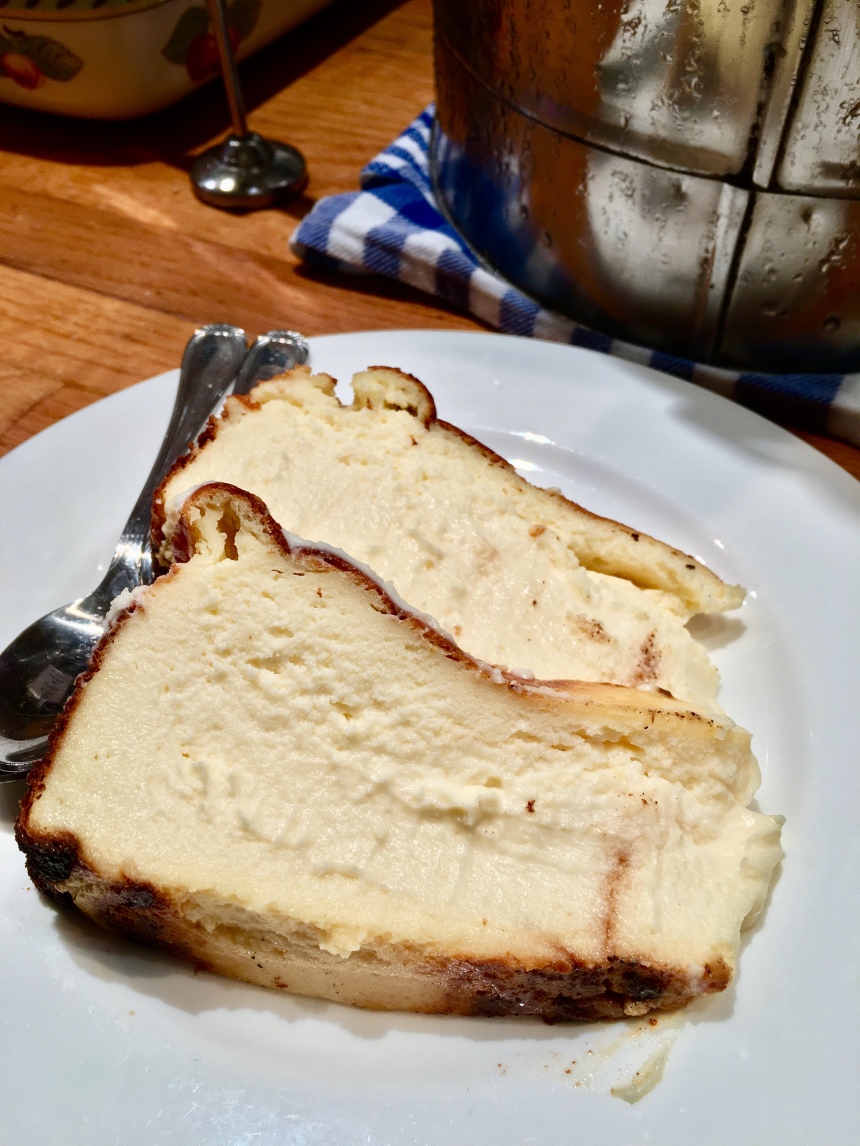 Awarded a one Michelin star and topping the OAD List of European Gourmet Casual restaurants for 2017 is Ganbara, a tiny spot often crowded with chefs, tourists and foodies alike who come here for its exquisite, seasonal produce (which explain the higher prices). Think wild blooms of Basque cepes, chanterelles and morels picked from the nearby mountain region, fresh-caught wild turbot, hake, goose barnacles and sole, and prawns from Palamós. Must order dishes: Black truffle scrambled eggs and the popular egg with seasonal wild mushrooms. 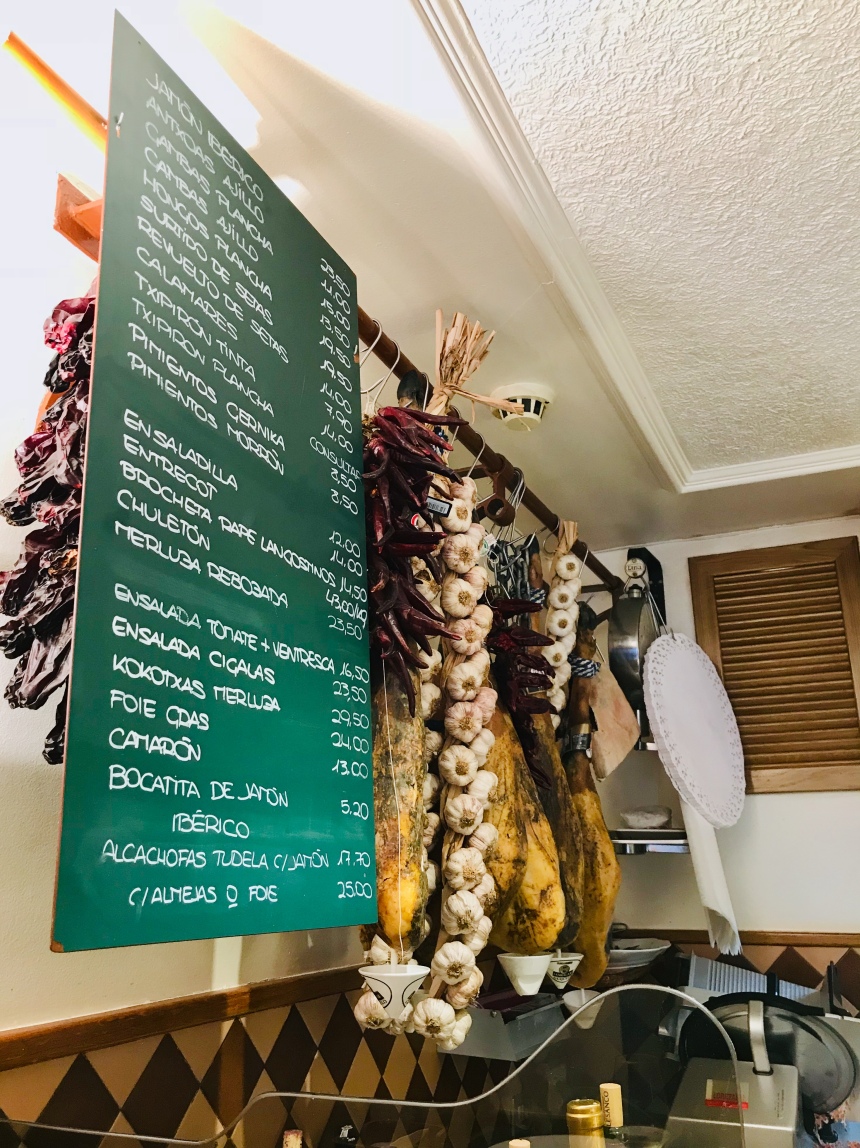 A ‘must-visit’ for the best traditional tortilla espanola – or Spanish omelette – in San Sebastian. Here, reservations are essential if you want to try a slice of the popular egg and potato-filled tortilla – only one is made fresh twice daily at 1pm and 8pm. As soon as the shutters to the bar opened at 1pm, a crowd quickly filled the small space, and waited knowingly in anticipation for the tortilla to be brought in from the kitchen. It was hard to escape feeling both nervous and excited at this point – as soon as the hot tortilla pan arrived, the owner sliced the tortilla with a small knife and served each portion with fresh bread. Names belonging to those who reserved a slice would be called out and portions distributed to their lucky customers. The tortilla was simple and delicious, with a perfect combination of runny egg and soft potato chunks. Other dishes, including the sweet ensalada de tomate (tomato salad) and oven-blistered pimientos de padron (Padrón peppers) are also a must-order. There are no complexities at Nestor (each dish on the small menu is made with only three ingredients), only soulful food that we would remember for a long time.

Tip: Arrive an hour early to add your name to the list and reserve a tortilla slice. 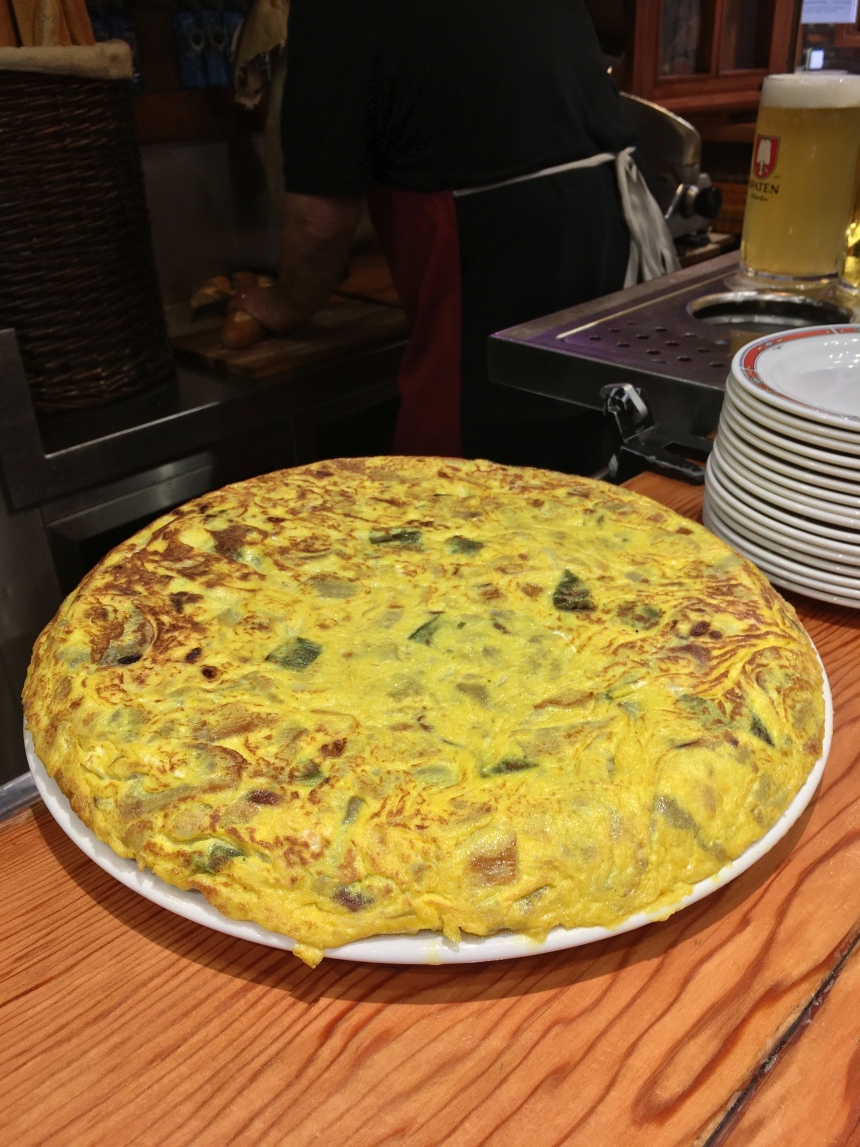 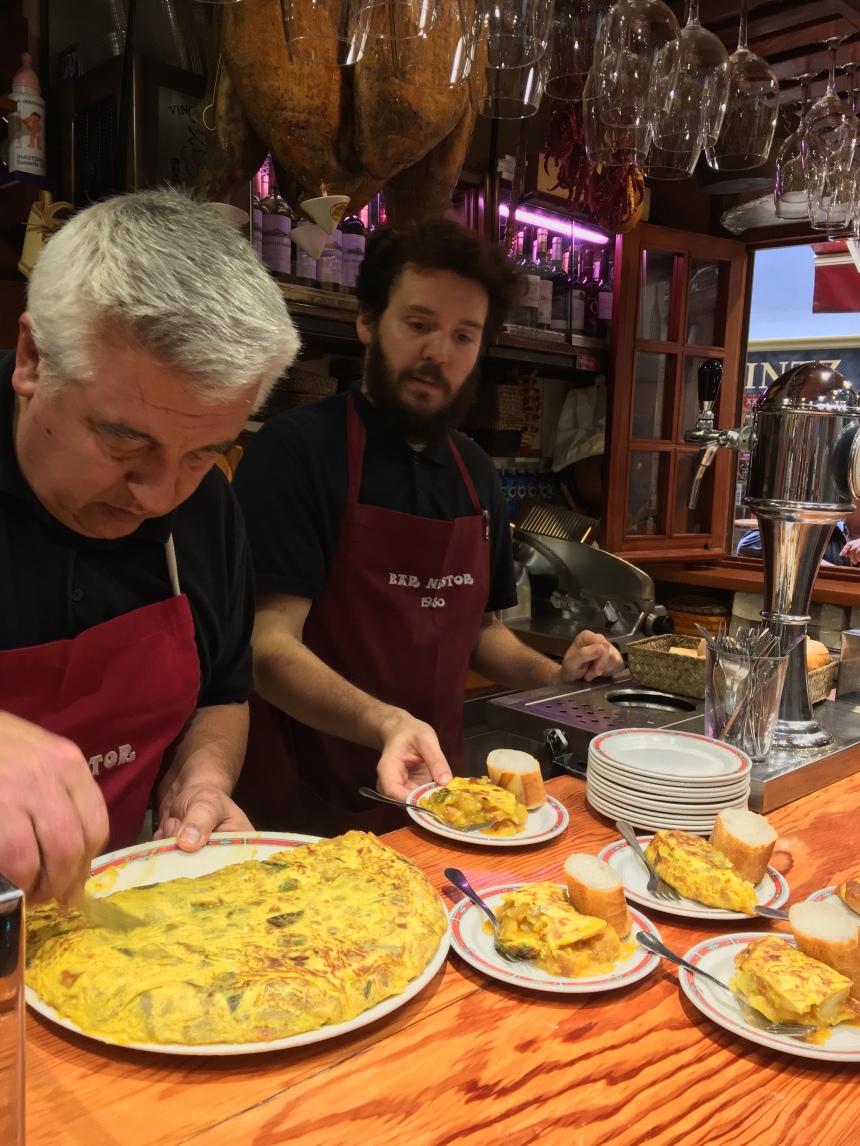 Wildly popular La Cuchara de San Telmo has earned a reputation for its unpretentious vibe and cooking up some of the heartiest nueva cocina vasca (Basque new cuisine) dishes in town – think oily, roasted foie gras the size of a forearm, and thick slabs of tender suckling pig. We had to order from a blackboard menu – by this I meant catching the attention of the bartender by any means possible and shouting the order over a lively crowd – and wait for our names to be called to collect our dishes. We left La Cuchara de San Telmo with satiated bellies and mentally swore off eating another ounce of duck liver for a while.

Pasteleria Izar (Not part of the list but worth a mention)

With its heady aroma of freshly baked goods and rows of traditional sugary Basque pastries, cakes, nougats and chocolates on display, it is hard to go past without noticing Izar, one of San Sebastian’s well-loved pastelerias. Opened in 1949, the family-run bakery specialises in home-style puff pastries filled with cream or custard, and principe rolls piped full of chocolate truffle – perfectly fattening as an after-pintxo snack or for breakfast the next day. 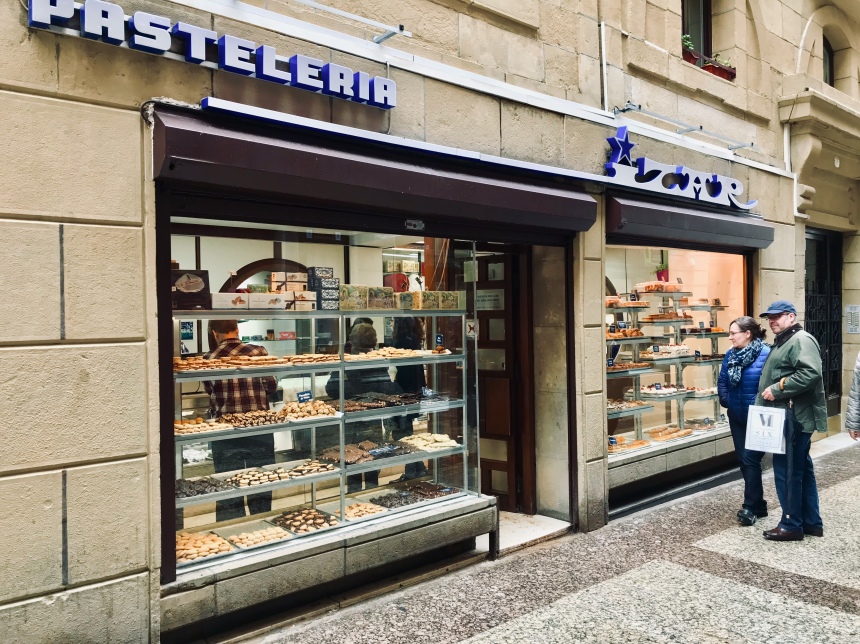 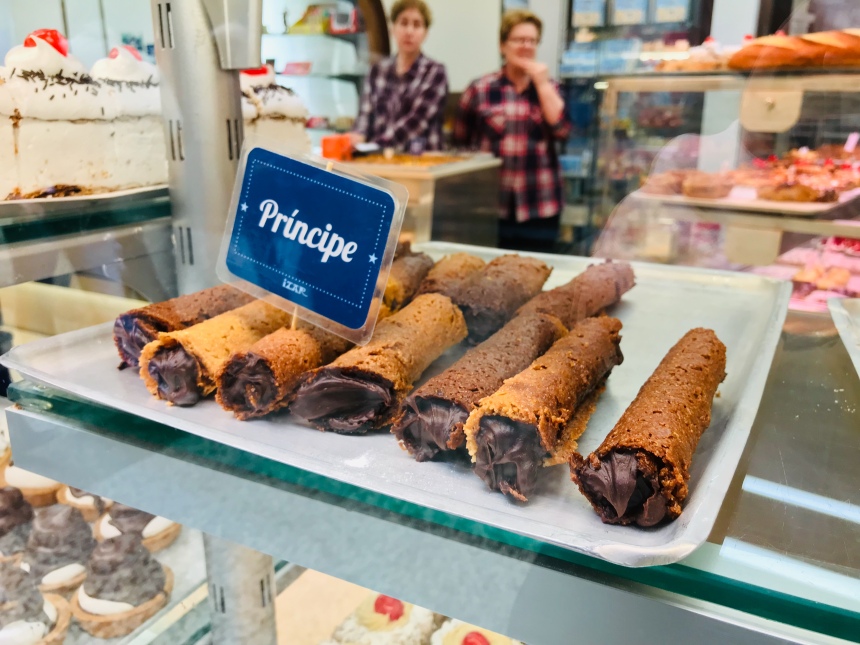 Gourmand journeys through Japan and the rest of the world. Keep us bookmarked and stay hungry.

1 reply to San Sebastian: A Crawl of the City’s Best Pintxo Bars

This site uses Akismet to reduce spam. Learn how your comment data is processed.